The attachment that is visible for a slot can be keyed in animations.

A slot is parented to a bone is a container for attachments, where only one attachment (or none) can be visible at any given time. Slots are very important for many reasons, even if at first they may be difficult to appreciate. A slot is only conceptual, it does not have a position and it is not drawn.

The draw order for a skeleton is a list of slots, where attachments for slots higher in the list are drawn on top of those below. The draw order can be seen under the skeleton in the tree. 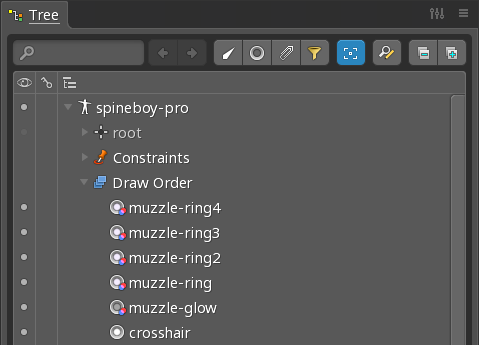 Slots group attachments of the same type. For example, a weapon slot may have a knife, sword, axe, etc. Since only the weapon slot appears in the draw order, the draw order list stays concise even if the skeleton has hundreds or thousands of weapons.

When using an image editor script the images will be imported into Spine under slots that already have the correct draw order.

Alternatively, the plus (+) or minus (-) keys on your keyboard will change the draw order of the slot for the current selection. Rather than finding a slot in the tree, it can be convenient to select an attachment in the viewport, then use these hotkeys to adjust the draw order for the attachment's slot. Hold shift to jump by 5.

Here the eye slot was moved from above the googles slot to below it in the draw order.

Adjusting the draw order can be made easier by using the filter buttons in the upper left of the tree view to hide bones and attachments, leaving only slots visible in the tree under the Slots node. These slots represent the draw order and can be dragged up or down. 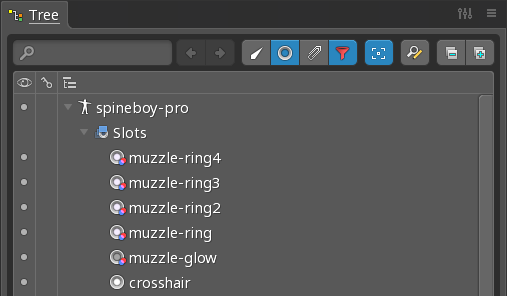 The slot color tints the slot's attachment, controls the attachment's alpha (opacity), and can be keyed. Attachments have their own, separate color but it cannot be keyed.

It is better to hide an attachment by setting a slot attachment key. To avoid an abrupt disappearance, the slot color can be used to fade to transparent before hiding.

When the color and alpha have been separated for an animation, two color buttons appear. Clicking either button opens the same slot color dialog which can change either the alpha, color, or both.

Tint black enables tinting an image's dark colors separately from its light colors. When used with grayscale images, this can achieve a wide variety of colored images. It also allows for effects such as a solid color silhouette, inverted colors, Super Mario invincibility star flashing, and more. Additional effects can be achieved when using the additive, screen, or multiply blend modes.

Tint black is enabled by checking Tint Black for a slot and causes a second color button to appear.

Blending controls how the slot attachment's pixels are combined with the pixels below:

In animate mode, an additional row appears in the slot properties.

The Alpha checkbox allows color (RGB) and alpha (A) to be keyed separately for the current animation. See separate color and alpha for more information. 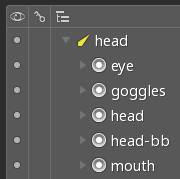 Like bones, slots have a visibility dot in the tree. When hidden, the slot will not be drawn in the viewport and won't appear in image or video exports. However, the slot will still appear in data exports.

If you've hidden many slots or bones, ctrl+H will show them all again.

Hiding a slot is intended only for temporarily reducing clutter in the viewport and cannot be keyed. You may want to hide the slot's attachment and key it instead.

Right clicking a bone's visibility dot will toggle hiding the bone and all child bones and slots.