I made a python script to get an image sequence into spine.

Let me know if you have any issues! Sorry for it not having an interface, but I figure this is a temporary solution (at least I hope Esoteric is planning something like this) so didn’t want to go too far with it.

This is quite cool! Or should I say FANCY?!

Ever since Spine development started, even before the first release, we planned on having a "region sequence" type of attachment. This is like a region attachment but shows a sequence of images with a specified framerate and looping behavior. It would be great to finally get the feature in. For now it's only in spine-libgdx:
https://github.com/EsotericSoftware/spine-runtimes/blob/master/spine-libgdx/spine-libgdx/src/com/esotericsoftware/spine/attachments/RegionSequenceAttachment.java

Great to hear, Nate! Region Sequences sound exactly like what my team has wanted since we started using Spine. I'm guessing keyframes could trigger playback? Looking forward to seeing it be part of the editor!

We could have a timeline for starting/stopping playback. It could also be done by hiding/showing attachments, though this wouldn't allow changing looping behavior, sequence framerate, etc.

Hmm. The attachment visibility method would be nice because you wouldn't have to make as many major changes on all the different engine implementations and it should work in most cases I can think of. More control would be useful though.

If you do decide to give region sequences their own timeline it also could be very useful if there was a way to set keyframes with a percent of the attachments time range and it could interpolate with the next keyframe's time value as well as use curves to ease in and out playback. This way you could do things like have the same explosion sequence used for quick small explosions or long large explosions that could slow down at the end.

If you had a sprite sheet of an object at a bunch of different angles you could also use a feature like that to control what angle to render the sprite and at what speed to turn it. Which if you took it a step further you could do something that would look up two axises in the sprite sheet which could end up with some pretty interesting things. Thinking stuff like mouth expression rigs

So yeah just hide/unhide is all I really need. But the other stuff would be cool too haha

Just fixed an issue on for mac users. If you were getting an error saying spine_sequence.py: error:
unrecognized arguments: images/fancy/001.png images/fancy/002.png
images/fancy/003.png ... etc then this update will fix it

Sorry I don't have a mac to test with, so was just was crossing my fingers

artist said it was a neat idea, but he would have preferred if it was a "one click button"

BinaryCats ha scritto:artist said it was a neat idea, but he would have preferred if it was a "one click button"

Yeah sorry.. there is no plugin api for Spine, otherwise yeah that's what it would be. I can add an interface, but since Esoteric is planning something that would replace this, I'm hesitant in putting too much work into it. I'll think about it

Thank you! It 's helped.

I have not found any implementation in Spine yet, so I created an interface for your script! 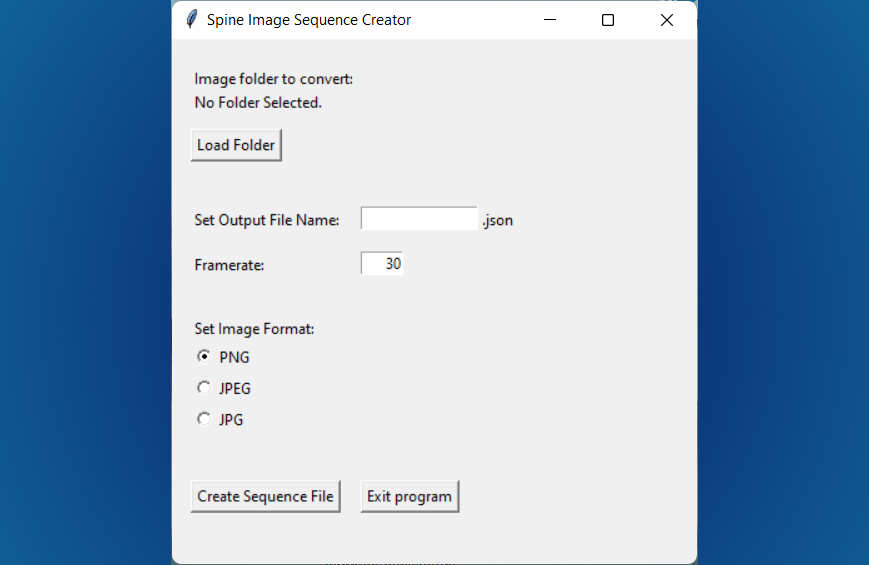 I don't know how high the demand is, so I didn't add additional options to it.

I runs similar to your python script, only that you simply execute the app inside the spine folder.
Runs on Windows!


Also made a quick tutorial on it. I called it SIS: Spine 2D Image Sequence Solution! Like a little sister app to spine

Please note in 4.1 we have add a Sequence checkbox to region and mesh attachments. That makes it easier to do frame-by-frame animation.

Of course it can still be useful to use keys to do frame-by-frame animation, which gives you the most control over the timing of each individual frame.

Oh, I didn't know that! I only checked the documentations and found nothing about it.

Okay, that's great then.
The version 4.1 seems to have a few substantial new features, which is cool.