(using English so I can reply faster, sorry!)

I recorded how to add an IK target without the bones moving (described in my post above):

You can see parentBone and childBone do not move when IK is added.

I don't understand your example【B】. You explained you have bones root > aBone > parentBone > childBone, but which bones do you want controlled by IK?

If you want 3 bone IK, for example aBone, parentBone, childBone, unfortunately Spine cannot do that. With 1 or 2 bones, IK can be solved directly with math. With 3 or more bones, IK is more complicated and does not have a direct math solution, it is done incrementally. This means the solution depends on the rotation of the bones in previous frames. To jump to the middle of an animation, we would have to start at the beginning of the animation and compute the IK solution for each frame until we get to the middle. Doing that is expensive.

Consider if aBone, parentBone, childBone used 3 bone IK, this would be one solution: 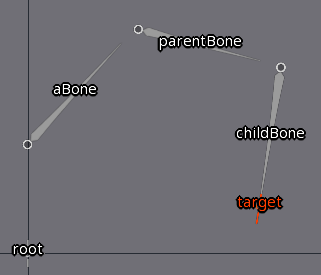 This would also be a solution (target has not moved): 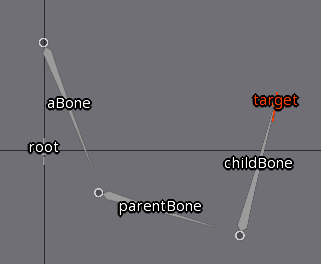 There are an infinite number of solutions for 3+ bone IK. This is why the IK solution must depend on previous frames. We may do that in the future, but so far we prefer to keep it easy to apply an animation at any frame, without worrying about the pose in previous frames.

Thank you for your reply.
Let me apologize for my poor English.

Videos are easier to understand!
The problem I have is below Video.

If it is difficult, I’ll give up on that IKcontroll.
thank you.
Non hai i permessi necessari per visualizzare i file allegati in questo messaggio.

制約を並べ替えることができます。 これは最初に適用されるものを変更します。
(Eng: You can reorder the constraints. this will change which one is applied first.)
順序を変更するには、リスト内の制約を下にドラッグするだけです (To change the order, just drag the constraint in the list down)

段落はユーザーガイドで見つけることができます： (you can find a paragraph in the user guide:)
Constraints: Order